I wanted to launch a couple of VMs on my test box with one server acting as a DHCP server to another on an “internal” defined network.

Its taken me a couple of days to figure out why this was happening and I’ve installed Windows/Linux, turned firewalls on and off and messed with many Hyper-V Settings down to the point where I was analysing DHCP packets using wireshark. I could see the DHCP “client” requesting an IP and the server offering one out, but the the client wouldn’t take it. After many installs and re-installs I got to the answer

The answer I found is to setup an internal network switch normally like this: 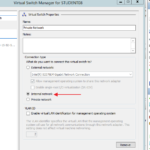 ..and then on the configured network cards:

Set Protected Network on both VMs to unticked. That seems to work….